We are proud to announce that our new dedicated site for God Complex is LIVE! 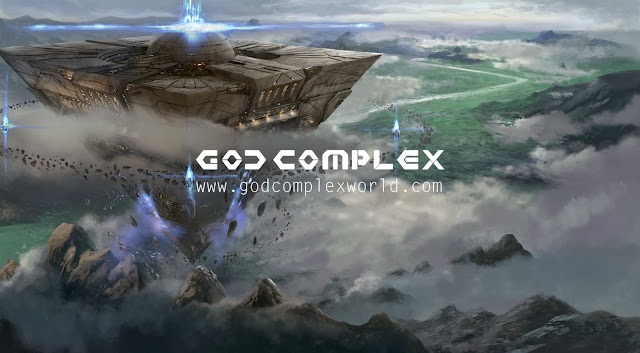 From now on, all God Complex related update will move to the "BLOG" section of the site. Thank you for supporting us!
Posted by Bryan Lie at 9:31 PM 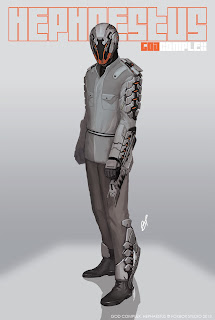 Humans recognized Zeus as the glorious one. What they didn't know was that all of Zeus' and the Olympians' glory came from one extraordinary mind, Hephaestus'. A master creator, a genius tinkerer, he is known mostly only as "the engineer". However, even with his superior knowledge of the world, he was born with the inability to control his physical manifestation or his "shell".

Eventually he managed to forge devices to help him master his shell, but such disability is still deemed imperfection among the Olympians circle. Shunned by the superficially minded majority, he secluded and buried himself in his work while Zeus and the rest of Hellenic Rulers reap the fruit of his labor. Athena, Hermes, and Prometheus are among the few rulers to still have Hephaestus' respect.

Realizing the Rulers are no more the advanced beings they once was, Hephaestus and Prometheus, gave the humans guidance to divinity. Knowledge is the most efficient weapon against fear. It is said that the moment Prometheus taught humans the nature of the flame, they plant the first seed of rebellion against the rulers. The action of the two rogue Rulers angered Zeus. Only with the help of Hermes and his schemes, Hephaestus was able to escape his confinement while Prometheus is forever punished for his deed. 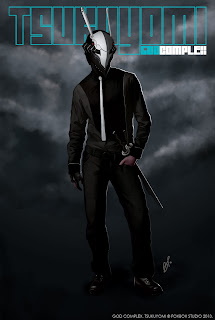 One of the Three Great Rulers of Nippon. "Silence of the Night" is a title the humans gave him since he only appears during a stormless sundown. Being a quiet and reserved character, little is known about him. His mystery gave birth to legends and rumors. Ancient humans believed that the traditional blade he is carrying was so sharp that he used it to cut up the moon, and at every quiet night, he would slice it little by little to appease the wrath of the ocean until one day a new moon replaces the old one. Another legend said the moon was the eye of an enormous demon where misfortunes came from, and Tsukuyomi is the guardian of the night to protect humans from them.

Posted by Foxbox Studio at 9:17 PM 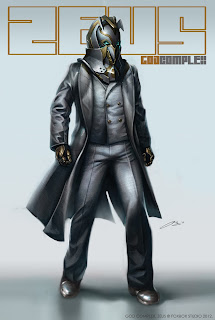 Zeus is the father of the powerful Ares, virtuous Apollo, wise Athena, and many other powerful Rulers. He is the CEO of Acropolis Inc and the principal Ruler to sit on the Olympus Chamber, the highest office in all of Hellenic Republic. He reigns over the Hellenic sky, a realm the humans have been dreaming to reach for the longest time.

Inheriting his father’s traits, Zeus is ruthless. He would kill his own father if it means having more power, which in a way he did. He is also shrewd, cunning, and highly intelligent. These characteristics of him brought him great fortune in his early days of becoming a Ruler. Together with his brothers and Hephaestus' technology, Zeus built the first and largest energy manufacturing giant humans had ever seen.

Later in his years, Zeus, like many other rulers, was enamored by the humans. Enchanted with their flaws, Zeus is turning into one. His honor replaced by his pride and his wisdom replaced by his lust. Zeus produced many bastards, both humans and divines.
Posted by Foxbox Studio at 8:53 PM 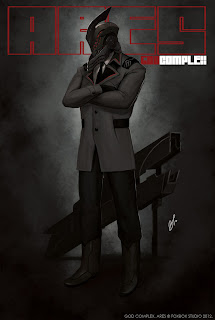 Ares, one of the Big Twelve of Acropolis and a son of Zeus. With a reputation for athletic excellence that is as formidable as his daunting physique, along with the ability to appear victorious in any war he partake in, Ares is given the title "The God of War".

During Acropolis' golden age, back when the humans was still primitive, Ares commanded the most fearsome group of zealots. Zeus is never particularly fond of Ares. Unlike his sister, Athena, who lead her men with intelligence and wisdom, destructive power and physical dominance is the only method Ares ever utilized. With his twin rail gun, Phobos and Deimos, Ares easily disintegrate anyone who dares cross his ways.

His reign can only continue for so long until the age of reason comes to end the terror. With the rapid development of human's technology, Ares lost the battle with the humans. This defeat makes him no longer relevant. His ways are obsolete, his followers swiftly diminish in  numbers, and his glory has left him, never to return.

Posted by Foxbox Studio at 1:08 PM 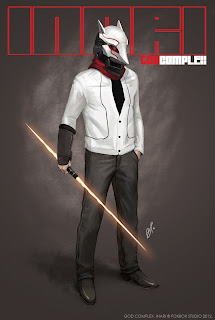 High strain between the Rulers and the humans can be felt throughout the Earth. However, in the exotic land of Nippon, a different atmosphere took place. Undeterred by the human's highly advanced technology and science in the region, both races live in harmony. The Rulers race in this region are a philanthropic bunch and using their connection to nature, they helped the people of Nippon to get back on their feet after their dark and traumatic past. In many places of the land, the humans built many temples in honor of their deeds, and more than one-third of the temples are dedicated to their favorite Ruler, Inari.

Inari is among the most fortunate of all Rulers. It is believed that  many who follow after Inari will also experience great fortune, thus the reason he has many followers. He never let his stature to shadow his purpose and he walks among people as one of them, never to let them turn into zealots. Rumor has it that the Kitsune Rod on his right arm is his tool to annihilate misfortunes.

Inari shares many similar characteristics with one of the Ruler of Hellenic Republic, Hermes. They are not only similar, they know each other quite well. To quote the words of Hermes to Inari: "A guy as lucky as you, I better have you on my side."
Posted by Foxbox Studio at 4:53 AM 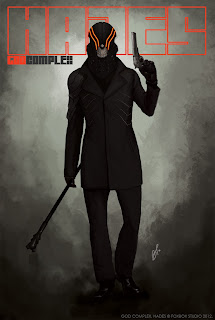 Hellenic region is separated into three power groups and they are led by the three sibling Rulers. Zeus leads the energy company, Acropolis, Inc, Poseidon runs the maritime corporation, Aegae, and Hades  is the figurehead of the largest criminal organization in Hellenic Republic, Tartarus. While he is not exactly malevolent, Hades along with trusted gun, Cerberus II, strike mortal fear into people's hearts because Hades is not bound by any laws. Neither the Rulers' nor humans' rules meant anything to him. He judges based on his own creed and justice.

Hades is not officially a member of Acropolis, Inc, yet he plays a big part during the company's golden age. However, entering the iron age, Hades is seen to be moving further away from his brothers. His motivation is shrouded in mistery. Nobody really knows what his plans with the humans are or which side he is on. Albeit his complex relationship with the big twelve of Acropolis, he has a relatively close affiliation with Hermes.
Posted by Foxbox Studio at 10:52 PM 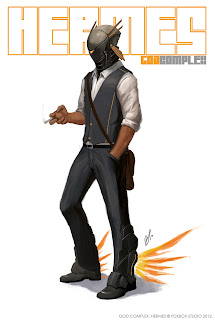 Acropolis, Inc, the first corporation to distribute energy to the people of Hellenic Republic, was founded by  a primary Ruler, Zeus. Zeus has many sons and among them is Hermes. Although he is chosen to be among the big twelve in the company, he has never been Zeus' favorite. He is always the one doing most of the work even if the glory always falls on his brothers. Apollo being the great one or Ares as the brave one. While he never seemed to have much ambition, nevertheless cunning is Hermes' greatest strength. He needs neither physical prowess nor great charisma to get his way. Instead, he can manipulate Acropolis' dying capital utilizing only his quick wit, and although he never really cares about Acropolis' fate, he saved it times and again using his relationship with Hades. Despite being born a Ruler, Hermes is a human sympathizer and he will be a central character in aiding the humans to rise against the Rulers.
Posted by Foxbox Studio at 8:36 AM

In the beginning, Earth was dominated by the "Rulers", A primordial race born of nature's force itself. Having the privilege to take after nature, they have the ability to understand and manipulate it's force for Earth's good.

Aeons passed and another race was born of nature. They are called "Humans". Being the second born, the humans lack the wisdom to understand nature and it's traits. Due to their primitive nature, they are no different than animals. Their action are based on animalistic instincts and live without any greater sense of purpose. The Rulers grew pity for their brothers' inadequacy. They guide the humans away from their doom. In return, the humans must share the burdens of The Rulers, and follow after them. With these newfound wisdom, the humans give their life to the Rulers. They worship The Rulers and they built monuments and temples to show appreciation to their brothers while at the same time they are fighting amongst themselves to fulfill their primal needs. For millennia, The Rulers and the humans walk hand-in-hand through chaos.

Over the years they worked together, The Rulers realized they lack something that the humans possessed. The humans, while lacking wisdom, they are blessed with "free-will". The destiny-chained Rulers are intrigued by this trait. They learned more about the humans and grew envious of the inferior race that they once took pity on. As a result, the once-benevolent race started to become more like the humans. Jealousy, lust, wrath, pride, greed, are a few example of human traits to infect The Rulers. The Rulers started to separate among themselves to become individuals and no longer a collective being, each worked for the advancement of their own agenda.

The greatest among nature's traits is that of balance. While The Rulers are becoming more like humans, the humans are becoming more like The Rulers. The humans ability to innovate gave birth to their weapon called "Science". Thinking that they are close to divinity, the humans foolishly challenged The Rulers with their science when it's still in infancy. The Rulers figured that what the humans lack in power, they gain in numbers. The first divine war in Babel was dominated by The Rulers and to prevent the humans to ever rise up to power, they break them into smaller groups and divide them among the face of the Earth.

For a long time, The Rulers governed over humans and their ways of living. They recruited humans to join their cause promising divinity to the humans who follow their will. These humans are called the zealots. Fearing the potential of science and The Rulers race to become irrelevant, They used the zealots to keep a lid on science. They succeeded for a time being until another invention called "The Web" was born of human mind. This invention once again united the humans together and science advanced rapidly. With the power of science and the web, the humans once again have the chance for freedom and the tension between the Rulers and the humans are growing ever stronger.

Posted by Foxbox Studio at 1:30 AM